Today was the most magical day of all ... for many reasons!  First of all, it was the day that we visited Disney's Magic Kingdom!  What isn't magical about that?

Secondly, my brother, Alan Fath, and his daughter, Gracie, were able to spend the entire day with us! And, lastly ... I was able to see some sweet friends that formerly attended University of Mobile who now work at Magic Kingdom.  It was a fun day! 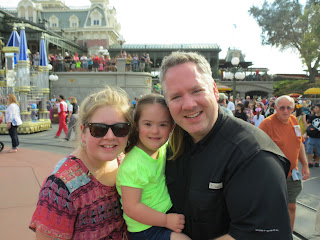 It all started out with us arriving early to see the opening show at Magic Kingdom.  As soon as the gates opened up, we headed over to Town Hall to get a picture with Mickey and Minnie.  That was really fun!  After that, we left and went straight to the new section of Magic Kingdom ... Fantasy Land. 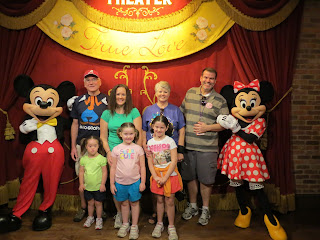 We met up with Colton Brooks at the entrance of Belle's Castle where he escorted us right up to the front of the line to see that cute little interactive show.  (Thanks, Colton!  It was great to see you!) 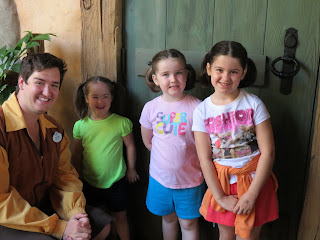 Natalie decided to give roller coasters another try today and rode Goofy's Barn Stormer with me.  She did much better on that roller coaster!

We went through as much of the left-hand side of the park as we could before lunch.  And, of course, we would stop at every character spot for photos and autographs!  Man, it was great being taken right up to the characters for that meet and greet time!  No waiting in long lines!

For lunch, we headed, by boat, to the Wilderness Lodge for lunch with the family at Whispering Canyon.  That was lots of fun and a nice change of pace. 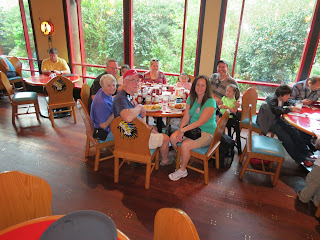 After lunch, we took the boat back to Magic Kingdom to meet a sweet friend from University of Mobile, Caleb Graham.  He is VERY good friends with Prince Eric and arranged a special "meet and greet" time with some characters for us.  He told me to have our group at the Car Barn in the Magic Kingdom by 2:30pm that day.  Someone came to get us and took us to a door located right beside the Car Barn.  As soon as Victoria and I walked through the door I heard a big, "Surprise!!!"  There had to be between 15-20 different characters waiting in the room for us.  It was, by far, the most special memory of our trip!  I had to hold back the tears because that was such a sweet moment.  All of our family got to meet every character, prince/princess in the room.  Even Mickey and Minnie were there!  They all signed our girl's autograph books and then we took several photos with all of them.  I think most of my family was in tears!  This was definitely a memory from our trip that I'll never forget!  Thank you, Caleb, for arranging that special moment for us! 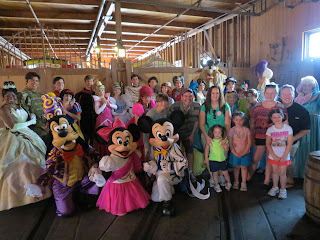 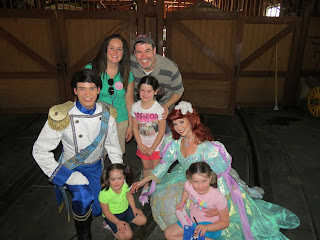 The big "Celebrate" parade that all of the characters were in was to take place at 3pm, right after this meet and greet time.  We had a special area to stand in right at the start of the parade.  Every character that we had just seen gave us big waves and threw kisses our way.  The Fairy Godmother from Cinderella even threw two big handfuls of "fairy dust" on us as she passed by us on her float.  It was totally great!

We finished off as much of the park as we could that afternoon.  We ended our day at the Magic Kingdom by watching the Wishes fireworks show and also watching the Electric Parade.  It was a full, fun day!  Many special memories were made this day!  We feel blessed!

Posted by messickmom at 7:37 AM

Giving study this Post, I experience found out for myself a lot of the unexampled. Thank you!