This past week has been a busy one at the Messick home! 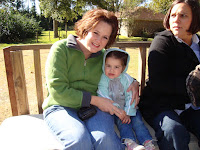 Elyssa went on her first ever field trip to Brantly Farm in Fairhope. We had a great time petting the animals and going on the hayride. Elyssa even surprised me and rode on a pony! I could hardly believe she did that, but after seeing all the other kids ride the pony, she decided she was brave enough to do it! Here is a video of Elyssa on her wild pony ride! 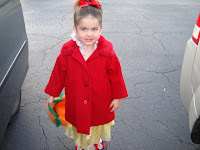 We had Fall Funtastic at our church on Wednesday, the 29th of November, and Elyssa went as Snow White. She looked so beautiful. When Mark saw us arrive at the church he said, "Is she wearing makeup??" I said, "Of course! All princesses wear a little makeup!" Mark was extra busy that day because he has to help everything set up for Fall Funtastic (he is one of the pastors at the church). I believe we had a record crowd this year. I'm expecting to hear that the crowd was in the thousands. It was a pretty huge event this year. Elyssa had a great time with me! And, you have to see the video I took of her before we left for Fall Funtastic. It's pretty funny!
Natalie was sick earlier this week with a stomach bug, so I let her stay home from Fall Funtastic. I did try, however, to get her to put on her outfit and she absolutely hated it. I had to video it because it was pretty funny. I know, I know ... I torture my kids when it comes to stuff like this, but I had to get it on video!

The funny thing is ... Natalie still wasn't happy just getting the hat off. She had to get the whole costume off before she calmed down! 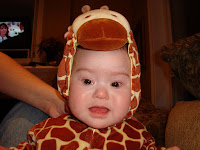 I also let Victoria stay home from Fall Funtastic because it was so cold that night, but here she is in her costume. She is a giraffe! She didn't like her costume too much either!

Even though this was a super busy week, there were many moments of fun! And, I was reminded again how precious my three little angels are. I am so blessed to have each of them under my care. Each moment I have with them and Mark is a gift from God!
Posted by messickmom at 6:48 PM

Funny thing is what I was laughing as well watching Natalie scream. Several people in the office hollered out "What are you watching??" cause they could hear the screaming and me laughing.